During part of the day, when I tidied my room & worked magic on my unbridled, undisciplined closet, I watched some TV.

Rather, I streamed Netflix & gobbled up Stacey & Clint’s hilarious finesse when they set straight a 22 year-old woman from NY. (I think they called her outfit, “Garbage Can Hussy”). A good session of people who are reported to the specialists usually is my magic bullet inspiration to cleaning my room, painting my boyish-nails, or throwing away stuff. “At least I don’t do that…um help me to please not do that…oh boy, I better get to work”. 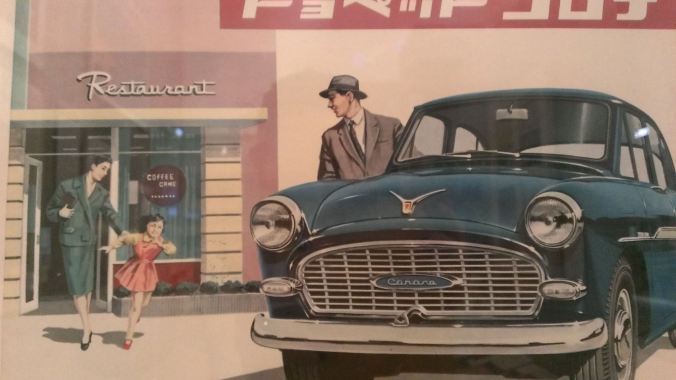 Anyway, I finally weeded out & separated a whole stack of maternity clothes because probably, if you are not pregnant, but last wore the shirt when you were 36 weeks loaded with life elbowing you in the ribs & knocking the wind out of you, probably, you don’t need it in your closet.

In the same spirit, I probably don’t need my bikinis taking up space in my drawers because I go to the beach never, despite Japan being one big island, or string of islands. I am still not over this. (I think I thought I’d be like twenty minutes from the beach like when I lived in Delray Beach, Florida. I am absolutely land-locked)!

Even during our most sweltering, the-humidity-is-a-jerk-summers, I didn’t end up laying out just somewhere. On a rock on the side of the street, at a park, on my patio, sans top. End of the summer and my legs are still their ivory white. I think we’d better Space Bag those bikinis, mate. On top of that, I finally found all my shorts, just when one should ready their scarves.

Also, no one ever mentioned that women here, after they have babies, or after they reach some secret I-dunno-what-age, they stop wearing two pieces, or maybe they never did. Japanese women are such creamy skin, no eye bag beauties even at 99. All those arm sleeves and intense glove and hat-wearing will pay off. It makes sense, then, that the culture as a whole does not show cleavage. It is like, centuries ago, there was a town council meeting, and everyone voted “No” on the décolleté issue. “What about for moms, Sid? Like those nursing? Or the bigger, more gorgeously voluptuous ladies”?

They do not show cleavage (but for the young ones, it is perfectly respectable to show miles of leg). According to these standards, some of my neighbors should probably put me on the Japanese equivalent of What Not to Wear. That would be just dandy, except if they would have some stuffy couple who have never gone overseas or read Vogue or at least desire to eat tabbouli or think about people who have naturally wavy or curly hair. I say that last bit because I swear to you, people even ask me if my son’s hair (yes, even when he was months old, like two), was a PERM. What kind of strange, cretin stage mom would sit some infant down and perm him, spread utterly noxious, putrid chemicals all over his hair shaft, make his little toddler tushy sit like that for an hour, maybe offer him a magazine or Coke, and then say, “Well, my dear, boy! How marvelous do we look?”

I have been asked about his “perm” maybe five times. 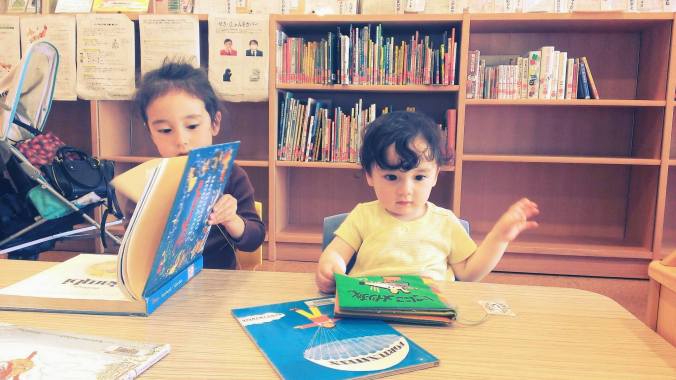 I also tossed old tops and juvenile prints. I tossed ’em hard. They are just outside my bedroom door, these bags, but I don’t dare look back. Some recycle shop can keep ’em. I’m moving on to a more sophisticated palette and shirts without holes. In the process of looking at what I tossed, I realized something. At thirty-five, my arms and posture want nothing to do with cap sleeves. Fine on Ts, but not on cloaks and mini jackets or dresses. I am ready for elegance and pants that fit. I’m ready for a room with a good view, not clutter. I’m ready to find all I’ve misplaced and keep it nice. Basically, the deal is that if I clean my room, I get to watch TV. More fashion, maybe something more mindless.

I had no idea I would talk about tidying a room. Here I thought I would say a few inspired words about the Miss America pageant I saw or you know, write about my girl’s birthday and all the sweet, lose-my-voice-magic of throwing her a Frozen birthday party with happy, squawking kids. Maybe I’d talk about her growing into four, my so many sleepless nights making Olaf and snowflakes. I thought I’d post pics of her adorable friends and the lovies I get to call my daughter and son.

Nope, apparently my inner-self wants to talk perms, cleavage, and cleaning my room.

Just a quick little referral to this neat blog, Cranes and Clovers, created by three sisters.

I’m gonna be a busy bee this week and beyond, as Hanukkah and Thanksgiving get ready to literally collide and give us one big mashup holiday of Pilgrims, Macabees, latkes and garlic smashed potatoes. (The world has aptly titled this not for another 70,000 years phenomena as Thanksgivingukkah).

(When you live abroad, hosting Thanksgiving can feel both like a joy and a great civic duty, like installing voting booths or teaching literacy. Hosting or even talking about Hanukkah also carries its own joys & sense of responsibility, particularly when you may be the first Jew your guest has ever met. Seriously). Dunno why this is in parenthesis; it deserves its own paragraph.

I’m here and in between my assessing essays, gathering info for our guide book, transcribing an author interview, teaching,

nursing, changing diapers, walking dogs, cleaning out the crazy laundry heap that is our room,

figuring out the holidays & baking pies,

I may post itty bitty notes about people doing neat things on blogs.

Have a really fabulously great one.

I’ll leave you with some pics of my boy trying out pancakes for the first time.

I’m off for my day called Extravaganza Cleaning, otherwise known as:

Epic-don’t-get-sidetracked-but-crank-some-Beastie-Boys-while-you-clean-even-if-only-for-an-hour-or-6 (even though you’ll have to wear Mr. Fat Baby in the carrier & further injure your shoulders to get anything done)-Day 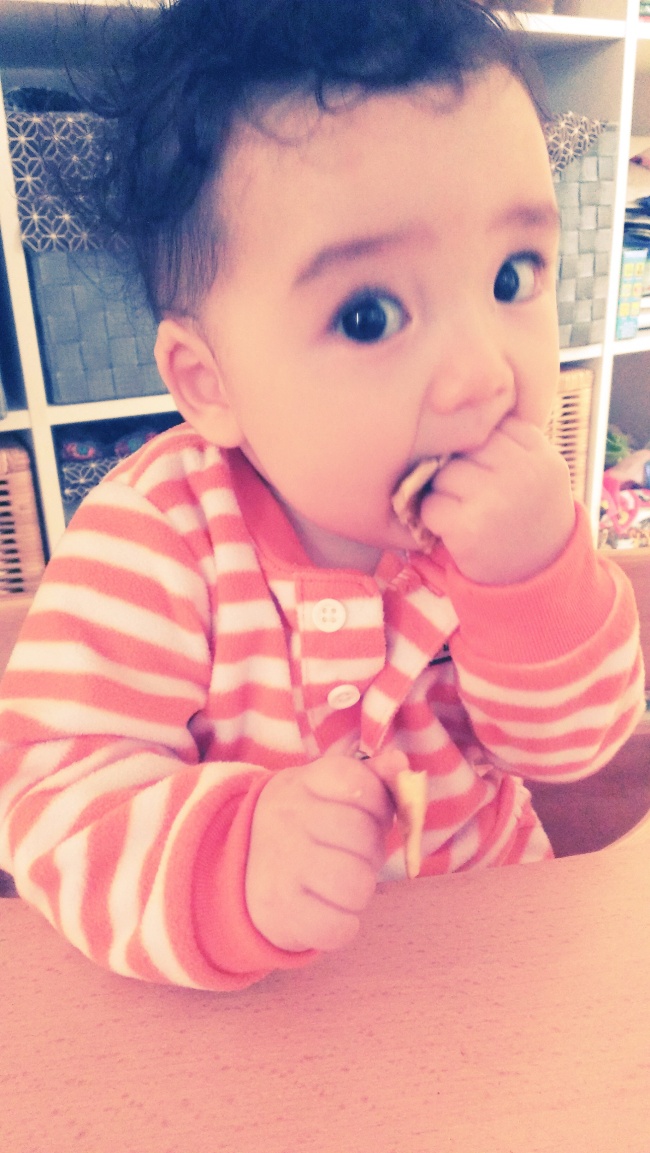 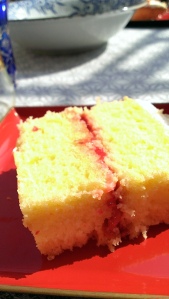 shhhh…just as we speak, i’ve plunked out tubs of old veg, a teensy container of what had been very nice meat prepared with ginger, mushy mushy rice cereal my baby didn’t eat, (who knows how much to prepare when he’s just starting out) 1/3 dried up sweet potato chocolate tofu pudding (ick) and some cole slaw, just a bit. Hush, you wonderful woman doin’ it all, some days it’s enough to do laundry and serve food at all. i’ve got heaps of dishtowels to fold and then fit, nursing our baby a vaccuum to manuever and i swear that’s not it. Shhh, you husband, i’m sorry to waste this food that i’m pluckin out from the fridge, but at least you know i don’t put my nails, hair, fashion, or whatnot ahead of this mess.

My Tweets
Join 109 other followers 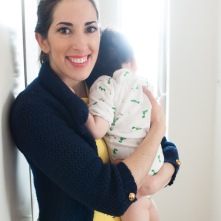 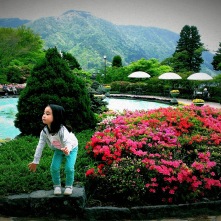 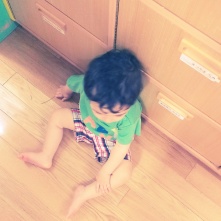 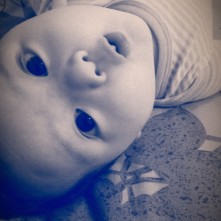